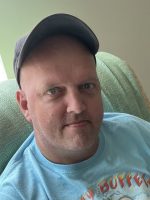 David “Dave” Michael Brodzinski, 48, of New Philadelphia, passed away November 20, 2022, following a valiant, 11-year battle with cancer, one he fought with courage and selflessness.

Born in Chardon, OH July 22, 1974, he was the son of Ronald B. Brodzinski, and the late Donna M. (Rielinger) Brodzinski, who preceded him in passing on June 1, 1998. Dave and his Dad spent countless hours watching sports together.

As a child, Dave was active in sports and the Boy Scouts of America at Sacred Heart School and graduated from Tuscarawas Central Catholic in 1992 where he lettered in wrestling, golf, and track. He continued his formal education at The Ohio State University, where he was fondly referred to as “Brother Dave” by his roommates, including his brother, Phillip.

Prior to his cancer diagnosis, Dave enjoyed a career with Weitz Golf International, where he supervised the construction of golf courses throughout the country.

Dave was an avid gardener, canning and sharing his annual harvest. He also was known for making Buckeyes during the Christmas season and enjoying a good glass of bourbon and a cigar. Additionally, he was an avid NASCAR, Buckeyes, and Cleveland sports fan. Dave and his family spent many hours enjoying Jimmy Buffett concerts together.

Most importantly, Dave’s faith was the foundation of his life. His faith was nurtured at Sacred Heart Church. He was a long-time member of the Tuscarawas Central Catholic Booster Club where he often volunteered.

Dave will be deeply missed by his father and step-mom, Ron and Carolyn Brodzinski, with whom he resided; his siblings, Kevin (Chrissy) of Mentor, Barbara (Tony) Mancari of Mentor, Phillip (Minta) of Alexandria, VA, and Theresa (significant others, Kim and Collette) Brodzinski of Ft. Collins, CO; step-siblings, Megan (fiancé, Spencer Dieck) Erwin of University Heights, and Melissa (Paul) Dilsaver of Aliso Viejo, CA; his dear friend, Kim Chaney; and nieces and nephews Andrew and Ryan Brodzinski, Anna, Sarah, Maria, Sofia, Tony, and Dominic Mancari, Sonia Brodzinski, and Rose and Vincent Dilsaver, for whom he was a devoted uncle. Numerous aunts, uncles, cousins, and friends complete his family.

Visitation will be held in Sacred Heart Church, 139 3rd St NE, New Philadelphia on Friday, November 25, 2022, from 10 to 11:30 a.m. Father Jeff Coning will celebrate a Mass of Christian Burial beginning at Noon on November 25. Interment will follow in Calvary Cemetery in New Philadelphia at a later date.