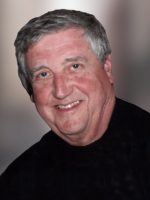 Born on September 10, 1935, in Midvale, Ohio, Dick was the son of the late Frank A. Tolloti and Bernice I. (Baldwin) Tolloti. He graduated in 1953 from Midvale High School.

After high school, Dick was offered a Major League Baseball contract with the Detroit Tigers but opted to go to college instead. He attended Kent State University for three years where he lettered in both baseball and basketball all three years. He then attended dental school at The Ohio State University where he graduated in 1960. That same year he opened his dental practice in New Philadelphia where he affectionately cared for his patients for 54 years.

On November 10, 1959, he married the gal he would spend the next 63 years with, Judith A. (Maurer) Tolloti. His love, guidance, and enthusiasm for life will be greatly missed by his wife, three children, six grandchildren, and one great-grandchild; daughter, Lori (Kim) King and sons, Craig (Patty) Tolloti and Jay (Lisa) Tolloti; grandchildren, Maxwell (Ali) Tolloti, James (Kellie) Tolloti, Jenna (Brendan) Kelley, Patrick Tolloti, Maureen Tolloti, Richard Tolloti; and great-grandson, Beckham Tolloti. He is also survived by his devoted sister, Gay Ries, and many nieces and nephews.

In addition to his parents, Dick was preceded in death by his father and mother-in-law, Gilbert and Aritabelle Maurer; and five brothers-in-law and two sisters-in-law.

During high school, Dick was named the Tuscarawas County Most Valuable Player in basketball in 1951 and 1952. He played in the Tuscarawas County Class A Baseball League for many years and served as the league commissioner. He was inducted into the Class A Hall of Fame in 1993. He was a member of the Kiwanis Club for twenty years, and a member of Sacred Heart Church in New Philadelphia for over 50 years. An avid golfer, Dick was a member of Union Country Club for more than 50 years and served a term as Club President. He loved following his children throughout their high school music and athletic events and then spent countless hours watching his grandchildren participate in their many activities. He and Judy enjoyed traveling with special memories of their trips to Europe and Greece. Dick also was a huge fan of Ohio State and all of the Cleveland teams, and he loved dancing and all kinds of music.

Calling hours will be held Tuesday, November 1, 2022, from 4:00 pm to 7:00 pm at the Linn-Hert-Geib Funeral Home in New Philadelphia. Father Jeff Coning will celebrate a Mass of Christian Burial on Wednesday, November 2nd at Sacred Heart Church at 10 a.m., with visitation preceding the Mass from 9:00 to 10:00 a.m. in the church. Burial will follow at Calvary Cemetery in New Philadelphia and a luncheon will be held in the Parish Center at Sacred Heart.