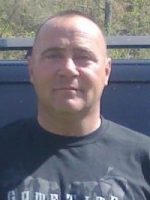 He was born in Akron, Ohio to the late Newt and Carol (Quatraro) Abner. Greg was a 1985 graduate of Newcomerstown High School and lived most of his life in Newcomerstown. He worked in the Auto Sales industry for over 30 years and had worked for JR Wheel as a Lead Forklift Operator for the last few years.

Greg was known over the years to be hilarious. witty, sarcastic, stubborn, and one-of-a-kind. He always had to be tinkering with something and never sat still. He enjoyed the outdoors, having bonfires, riding four-wheelers, and spending time with his boys.

Greg was proceeded in death by his mother Carol Abner and father Newt Abner, Jr.

A celebration of life for Greg will be announced at a later date. Friends and Family can donate to the American Cancer Society in memory of Greg.