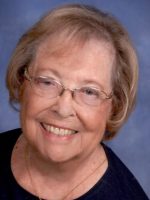 Her grandfather Hannawalt was an itinerant pastor who fought in the Civil War. She was the third of four children. The family moved to New Philadelphia in 1946 when her father became pastor of the First United Methodist Church.

Helen graduated from New Philadelphia High School in 1949. She attended Mount Union for a year and transferred to Ohio State to be with her new husband. He was a graduate of Denison University and was taking postgraduate courses at OSU. Helen and Bob Ed Harris met when she was working at the Goshen Dairy across from the church parsonage. The couple married on December 28, 1950.

After a year in Columbus, Bob and Helen moved to Cleveland where Bob worked for Gradall, and soon moved to New Philadelphia when Bob was transferred. Bob later became operations manager for Schwab Industries where he worked for twenty-five years. Helen began attending the Kent State branch in 1960 when the classes were held at the New Philadelphia High School. She graduated from Kent in 1968 with a bachelor’s degree in elementary education. She taught fourth and fifth grades in Strasburg for 28 years. Bob Ed passed away in 2003.

Helen was also very fortunate to have a special friendship with Max Carroll over the last several years. They spent many happy times together and he has been part of the family.

In addition to her parents and husband, Helen was preceded in passing by her son-in-law, Dan Evans; her brother, Bill Hannawalt; and sister, Jean Pasco; and her teenage sister, Marilyn Hannawalt.

Helen was active in her church and community. She worked for the church nursery and taught Sunday school, was on the Nurture Committee, was a student of Disciple II, and sometimes attended Tuesdays at J.I.M.’s Place. She belonged to a number of community philanthropic organizations, such as the Junior Clionians and the Tourist Club. She helped with Habitat for Humanity, belonged to the Art Center, the Tuscarawas County Travel Club, the Red Hat Club, and was a member of the Chestnut Society, an auxiliary for Kent State. She also liked to greet and honor scholarship recipients of the Quaker Foundation Bob Ed Harris memorial fund.

Helen liked to read, cook, bake, and make Swedish-weaving afghan, play a little golf and a lot of bridge. She especially enjoyed the Tuscarawas Philharmonic concerts and the music of her church. She also liked to travel and visited Europe and much of the U.S. Family was of utmost importance to Helen. She spoke fondly and often of her beautiful and gifted granddaughters and her great grandchildren. She loved family trips, such as to Myrtle Beach in the summers when her kids were growing up, and family gatherings for the holidays and weddings. Helen was the best and most loving wife, mother, grandmother, great-grandmother, and friend, and will be dearly missed.

Visitation will be held in the Linn-Hert-Geib Funeral Home & Crematory at New Philadelphia on Monday, December 5, 2022, from 12 noon to 2 p.m. Pastor Brandon Keck will officiate a funeral service for Helen beginning at 2 p.m.  Inurnment alongside her husband, will take place at a later date in Evergreen Burial Park at New Philadelphia.