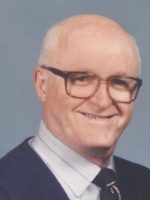 Born on White Ridge, West Virginia, on March 19, 1926, Bud was the son of the late Albert McLane Denison and Frankie McNeill White Denison.

Along with his ten siblings, Bud was raised in an era when he was expected to contribute to the family’s well-being but was then free to roam and explore; after finishing his daily chores, he could be found hiking, fishing on the river, and hunting in the mountains surrounding his family’s property.

His family operated a small mountain “hill” farm, milked about a dozen cows each day, and raised a variety of crops. Travel was on foot or by horse; there was no electricity on the farm until 1950. Howard attended a nearby one-room schoolhouse when younger, then lived with relatives in town to attend high school in Parsons, West Virginia. At the age of 17, with his parent’s consent, he entered the United States Navy. He served proudly through WWII until his honorable discharge.

Bud used his GI bill funds to attend classes at Potomac State College where he began studying to become a metallurgic engineer. However, after working in the Idaho panhandle forests in the summer of 1949 as a smoke chaser and firefighter, Bud decided he wanted a new career path. He returned to West Virginia, earned his Bachelor’s of Education in 1951, and became certified to teach high school math and science. He later returned to school to obtain a Master’s Degree from West Virginia University in Counseling and Psychiatry.

His teaching career took him to schools throughout West Virginia, Kentucky, and Ohio as a high school teacher, guidance counselor, and ultimately a licensed psychologist. In 1964, he was recruited to the Dover City Schools as their school psychologist and served the district for 26 years. On his retirement, he was also recognized by several other area school districts for the valuable contributions he had made to them in his “spare time”. The Ohio School Psychologists Association bestowed him with the R.A. Horn Honorary Life Membership Award for his significant contributions to the field of school psychology in the state.

In 1955, Bud married Dorothy Jean Alverson with whom he shared two children and 30 years of marriage before their divorce. In 1988, he lovingly blended three additional children into his life upon his marriage to his second wife, Joann Shields Murphy. Joann passed on July 17, 2020, just 10 days after the couple celebrated their 32nd wedding anniversary.

Bud was a consummate storyteller, an accomplished woodworker, and a puzzle-solving repair genius. For years, he was well known around Dover as ‘the guy who drove the red VW Beetle’ well beyond the car’s expected lifetime. He enjoyed vegetable gardening and wood-turning into his 90s, day trips with his favorite companions, fishing, bird watching, and following his favorite sports teams. But beyond all, he enjoyed getting to know and visit with other people regardless of their backgrounds. Along with Joann, he was a longtime member of Dover First United Methodist church.

Bud gave to his community in countless large and small ways. He was a dedicated educator and mental health advocate who volunteered many years on the Tuscarawas County Board of Mental Health, was instrumental in beginning a Big Brothers program through the Dover Schools, served with Meals on Wheels, and with Joann participated heavily in the Dress-a-Child program for 15 years. Most importantly, family, friends, and co-workers knew him as a solid, supportive man who could be counted upon for help when needed.

In addition to his parents and wives, Bud was preceded in death by all his siblings including Eleanor Lambert of Dover.

A celebration of Bud’s life is planned for a future date. In keeping with his wishes, he was cremated with his remains to be buried together with Joann in the Marsh family plot in Evergreen Burial Park at New Philadelphia and also in the family cemetery at Parsons, West Virginia.

Memorial contributions in Bud’s name may be directed to The Wilderness Center, Wilmot, OH to support their nature education programs.