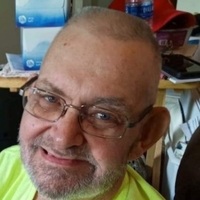 After his graduation from Newport Junior-Senior High School in 1974, he served his country in the U.S. Army. He had a career as a long-haul truck driver for many years until his health prevented him, and in retirement, he worked for the New Philadelphia Walmart and enjoyed being a Santa for the holidays. Most of all, he loved the companionship of his dear canine companion, Mugsy.

In addition to his mother, Rick is survived by his sons, Josh (partner, Josh) Maxwell and Michael (Erica) Maxwell; grandchildren, Alexandra, Tyler, Stephen, and Lauren; brother, Bob (Robin) Maxwell; and girlfriend, Brenda Cameron. He was preceded in death by his longtime companion, Sonja Leas, who was like a wife to him, as well as his father.

In keeping with Rick’s wishes, a graveside service will be held at 11:00 a.m. on Thursday, November 17, in Uhrichsville’s Union Cemetery where he will be interred beside Sonja. In lieu of flowers, memorial contributions may be made to the Tuscarawas County Humane Society, 1432 Tall Timber Rd. N.E., New Philadelphia, OH  44663, to honor his love for dogs.