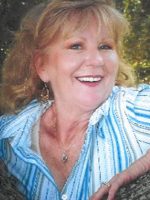 Jane Ann “Jayne” Maxwell was born on February 3, 1945, to Ray and Helen Maxwell of New Philadelphia, Ohio. She told people that she was born on 2/3/45 so she wouldn’t forget the date. Jayne was highly gifted in the arts and in making others feel welcomed, loved, talented, and valuable. She was a highly skilled and accomplished multi-media artist who was not afraid to tackle any project with the help of her Lord and Savior, Jesus Christ.

And accomplish and produce she did! In 5th grade, she attended the Kent State School for the Gifted where she won 1st place in singing Brahms Lullaby at the Ohio Conservatory of Music. Moving to Sardis, Ohio, along the river, Jayne’s artistic skills flourished under the training provided by Madame Shao Feng Sheng, a Chinese immigrant who had been selected as an apprentice to Frank Lloyd Wright.

Jayne painted her first mural in 1959 at her beloved River High School in Sardis. After 63 years, it remains untouched and still enjoyed by many in the main hallway of the school. While in high school, Jayne was the winner of the Crisco trophy for her outstanding work in home economics. In 1960, Jayne was selected to attend the coveted Pilgrimage for Youth which took her to New York City to personally deliver her award-winning speech, My Debt to You, My Country, before the entire United Nations Assembly. Her delivery received a standing ovation from the audience. In 2008, Jayne was awarded the River High School Alumni Hall of Fame outstanding achievement award.

Jayne was also a cheerleader, band member, baseball pitcher, and high school thespian. She also enjoyed being designated as the official school artist and designer for events. In 1968, Jayne won 1st place in an essay contest and penned many short stories and poems. She was a four-year member of the FHA. Jayne also played the organ, piano, and several band instruments without ever learning to read music.

As a multi-media artist, she created paintings, pottery, sculptures, and more. Jayne was a member of the Houston Texas Sweet Adelines during her time in the area and won national 1st place for singing and unique costume design. Back in Tuscarawas County, Jayne owned and operated Der Distelfink (technically translated as “the goldfinch”, but in Jayne’s translation it meant “just for pretty”) art studio in Dover, Ohio.

From 1973 to 2019, Jayne operated Jayne’s Place of Art in New Philadelphia’s south side. From 2017 to 2019, she also operated Factory Street Art & Pottery in Sugarcreek, Ohio. Between 2000 and 2015, Jayne was a highly sought-after and acclaimed artist along South Florida’s Treasure Coast. She painted over 2,500 murals in luxury homes, businesses, and government buildings. Her local celebrity came with terrific opportunities to attend featured events, often with her work as the center point. And she was always the life of the party as well.

In her lifetime, Jayne shared her love of art and life with thousands of students of all ages. Ever comical, her motto was “you won’t catch me with my paints down.” She was great at providing comedic relief with her jokes, stories, and skits. She was always handy with a phrase that explained the situation. One of her favorites was “You plant a carrot. You get a carrot.” Another favorite was “Love many. Trust few. And always paddle your own canoe.” She loved to share her talents, her humor, her joy for life, love, and God with everyone she met. She was and will always be a bright candle who lit the flames of a thousand others.

Jayne’s love, service, and dedication knew no bounds. She was a dedicated woman, a proud member of the Daughters of the Revolution, a student of Kent State and University of the Rio Grande, an art teacher at Central Catholic High School and Buckeye Career Center, a former member of Broadway United Methodist Church and Tuscarawas Art Guild, a Board member of the Tuscarawas County Convention and Visitors Bureau, and always an upstanding citizen of the community.

Survived by her spouse and partner Robert Burwell, children Amy, Rick, Ray, and Robert Swartzwelder, grandchildren Christopher Niles, Taylor Curran, and Payton Swartzwelder, great-grandchildren Finley Curran and Ayla Niles, stepsons Brian and Robert Burwell, step-grandchildren Elijah Burwell and Evan Burwell, and nieces Jane Miller, Alicia Speed, and Jennifer Patterson. Preceding her in death was her dear sister, Susan Raye (Maxwell) Debevec, and her parents. Beyond her family, we know Jayne’s memory will live on in the hearts of countless friends and students as well.

Jayne brought us all light, love, laughter, joy, hope, and encouragement. We are strengthened by the knowledge that she passed through this life in the arms of the angels to rest in peace with her Lord and Savior. We shall meet her again on the other side and carry her with us until that time.