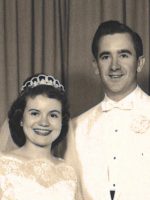 John was born on January 15, 1933, in Newcomerstown, Ohio a son of the late Edwin and Lela Ott. Gloria was born on April 25, 1937, in Dennison a daughter of the late Homer and Louise Brogne.

A Veteran of the Korean War, John enlisted in the United States Army in 1950 and proudly served his country until his honorable discharge in 1953. He was part of the Amphibious Invasion at Inchon and was awarded numerous medals, including the Purple Heart. John retired from Alsco after 34 years of service and later drove a school bus for New Philadelphia City Schools for five years.

Gloria graduated from St. Mary’s High School in 1954 and later in life worked for seven and a half years in the Circulation Department for the Times Reporter.

The couple married on October 4, 1958, and celebrated the birth of two sons and 62 years of marriage. John and Gloria’s faith was nurtured at Sacred Heart Catholic Church in New Philadelphia. Together, they spent many years sharing like interests that included bicycle riding, camping at Forrest Hills, and caring for numerous pet dogs. Winter months were spent together enjoying their home in Naples, Florida. But above all, they loved attending sporting events and activities of their grandchildren and later their great-grandchildren.

In his earlier years, John was known for his love of bowling and golfing as well as for participating as a coach on his sons’ little league teams. He was also involved with the Carl C. Stoller VFW Post 1445 of New Philadelphia, the Disabled American Veterans, and the 32nd Regiment Army Association. While Gloria was known for her excellent cooking, and hosting family gatherings, especially her traditional Christmas Eve spaghetti and meatball dinners.

In addition to his wife, Gloria, and parents, John was preceded in death by his sisters, Martha Slater and Marge McCune, and his brothers, Earl, Jim, and Ray Ott.

In keeping with their wishes, John and Gloria have been cremated. A private graveside service with military honors for John will take place in the Calvary Cemetery in New Philadelphia where he will be laid to rest next to the love of his life, Gloria. The Linn-Hert-Geib Funeral Home & Crematory is handling arrangements.

Contributions in memory of John and Gloria may be directed to Sacred Heart Church, 139 Third Street NE, New Philadelphia, Ohio 44663.