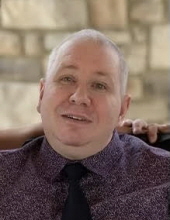 John was a 1983 graduate of New Philadelphia High School. He had worked at Marsh Lumber. He attended Jerusalem Church and was a member of the New Philadelphia Elks where he served as an exalted ruler.

A celebration of John’s life will take place at the Toland-Herzig Funeral Home & Crematory in Dover on Tuesday, November 29, 2022, at 11:00 am with Pastor Tom Hendershot officiating. Friends can call at the funeral home on Tuesday from 10:00-11:00 am. Following the service, a meal will be served at the Toland-Herzig Monarch Center. Burial will take place at Stone Creek Cemetery at 2:00 pm. To sign an online guestbook for John, visit the obituary link on the funeral home’s website.

Memorial contributions can be made to Jerusalem Church, 1417 Stonecreek Rd, New Philadelphia, Ohio 44663

To send flowers to the family of John, please visit our floral store.