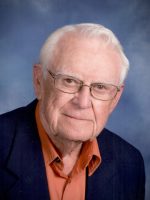 Born in Decatur, Indiana on April 7, 1922, he was the son of the late Rev. Reuben and Martha C. (Hinrichs) Elliker. His father was pastor of the First United Church of Christ (earlier the First Reformed Church) in Galion, Ohio for 29 years after serving and building other churches. John was raised and schooled in Galion, Ohio, and went on to Miami University, Oxford, Ohio.

John served with the U.S. Navy during World War II in the Northern Pacific, subsequently returning to Miami University as a civilian. He graduated in Economics and History and did his graduate studies at Georgetown University in International Law and later at the Army War College in International Relations.

In 1948, John married his beloved wife, Janet (Carpenter) Elliker of Detroit, Michigan who also attended Miami University and preceded John in death in 2014 and was known in Washington, D.C. and in Ohio as a dedicated Bible Study leader and as a sportswoman. They were married for 66 years.

John subsequently served with the National Security Agency (NSA). During his years with NSA, he undertook assignments in the Orient and in Europe, and at the National Headquarters and Processing Center in the Washington, D.C. area. His career took him to the highest executive levels of the agency. His senior positions included Director of Foreign Relations, Director of Field Activity, and Assistant NSA Deputy Director for Policy. Following retirement, John and Jan moved to New Philadelphia in 1988.

John was active in community affairs in various capacities. He served with the Tuscarawas County Chamber of Commerce, the Tuscarawas Philharmonic, and the local Kiwanis Club. He was active as a member of the Dover Alliance Church serving over the years in several positions such as elder, church governing board, and board secretary as well as musical activities.
John frequently lectured on foreign affairs for local organizations. He was a member of the Union Country Club where both he and Jan were ardent golfers.

In addition to his parents and wife, John is preceded in death by two brothers, Richard of Cable, WI, and Bernard of Ellicott City, MD.

Burial will be private in Dover Burial Park. A memorial service will be held at the Dover Alliance Church, 228 East Third St., Dover OH, 44622 on Saturday, December 3, 2022, at 11:30 a.m. Family members can be greeted in the narthex following the service.

Donations in memory of John may be made to the Dover Alliance Church.

There will be a luncheon provided at the church following the service.

The family is grateful to Community Hospice for the concern and comfort offered to John and to Park Village Southside for their skilled care and services.