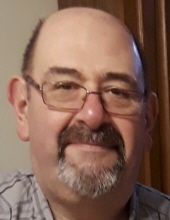 Born September 8, 1955, at Union Hospital in Dover, he was the son of the late Frederick and Mary Police Kerschbaumer. Joe graduated from Indian Valley North High School in 1974, and he attended meat processing classes at Buckeye Joint Vocational School. Joe worked as a meat cutter for M & M Market, Dave’s Meats, and Clayland IGA. He was also a licensed insurance agent for Western & Southern Life Insurance Co. for many years. His final position was that of a meat cutter for Giant Eagle in Canton, from which he retired in 2017 due to health reasons.

Joe attended Mount Bethel Community Chapel in Uhrichsville. He was a strong man of God and had great faith, and was very much loved by his family. Joe never met a stranger. One could tell by the twinkle in his eye that he was on the verge of making a new friend. Joe had many interests, the most important of which was helping others. He enjoyed processing meat, woodworking, gardening, landscaping, fishing, muscle cars, shopping (always trying to find the best deal), and disassembling things (but not necessarily being able to put them back together). He had a passion for listening to southern gospel music. Joe and his wife ministered with music in many area churches over the past 40 years of their marriage.

He will be dearly missed by his wife, Rose Huebner Kerschbaumer, whom he married on May 15, 1982; his daughters and sons-in-law, Michelle and Clay (Joe’s best friend) Inherst of New Philadelphia, Monica and Jim Roush of Stony Bottom, WV; his sons, Chris “Pepper” Kerschbaumer of Cass, WV, Seth Kerschbaumer and companion Jessica Carter of Clearfield, PA; his daughter, Chelsea Blackburn of Dennison; his grandsons, Cody Kerschbaumer Marsh of Uhrichsville and Quenton Joseph Inherst of New Philadelphia; his brother-in-law, Ken Laizure of New Philadelphia; his brother-in-law and sister-in-law, Chuck and Judy Laizure of Dennison; his numerous nieces and nephews who were very special to him throughout the years; and his many, many friends, Joe also leaves behind his brother, William “Bill’ Kerschbaumer.

In addition to his parents, Joe was preceded in death by his grandchildren, Ainsleigh and Ligon Roush; his nephews, Tony and Lee Kerschbaumer; his father-in-law and mother-in-law; his two sisters-in-law; one brother-in-law; and very close and dear friends, Steve and Ethel Moore.

In keeping with his wishes, Joe will be cremated and his ashes placed in the Roush Family Cemetery in Stony Bottom, WV. Calling hours will be Monday, November 28, 2022, 6 – 8 p.m., in the Toland-Herzig Funeral Home & Crematory, Dover. A memorial service honoring Joe’s life will be held Tuesday, November 29, at 2 p.m., in the funeral home. Directly after the service, there will be a meal provided by the Burning River Church at 420 West Third St., Dover.

Instead of flowers, the family requests that an act of kindness be performed for someone else in Joe’s memory. Donations may also be made to his wife to help with final expenses.