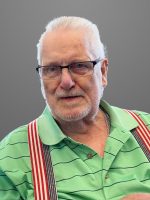 Born in Conotton, Harrison County, Ohio, Larry was the son of the late Harry C. and Ethel Luyster Horstman.

Larry grew up in Scio and helped his family operate the family’s general store and farm, prior to graduating from Scio High School in 1961 where he was Class President and a member of the football team. He briefly worked at the former Scio Pottery and then began attending The Ohio State University. It was there a young lady by name of Sandra Nemetz caught his eye and the two married on March 23, 1963.

Larry worked for a handful of years at Hercules Motor Company in Canton before joining the staff at Buckeye Career Center where he taught Machine Trades for nearly a decade. He later took a position at Gradall in New Philadelphia where he retired as a Process Engineer. Larry served as the President of the Local UAW in Canton, Ohio while with Hercules. He put his previous experience to work when he joined Gradall where he was elected to serve as the Union President for Local IAMAW. While serving as the Union President at Gradall, he was proud to have been selected to address the U.S. Congress, where he shared the importance of unions and companies working together to keep America’s manufacturing strong.

Larry was a longtime member of the Caldwell Lodge of F & A.M. at Bolivar. He was an avid fan of the Pittsburgh Steelers and The Ohio State Buckeyes. He loved collecting pieces of Scio Pottery, antique milk cans, crocks, and other antiques, finding many of his treasures by attending flea markets and auctions. Larry’s biggest joy in life was spending time with his family. He greatly enjoyed attending the sporting events and activities of his children and later his grandchildren.

In addition to his wife of 59 years, Larry is survived by a daughter, Lisa (John) Walsh; and a son, Larry (Tricia) Horstman, Jr. all of Bolivar; four grandchildren, Nicholas Walsh, Evan Walsh, Derek (Hayley Misitano) Horstman, and Mariah (Sam Higl) Horstman; and a great-grandson, Dawson Horstman.

Completing the family is a brother, Harry C. (Dee Ann) Horstman; a sister-in-law, Suzanne Nemetz, a special nephew, Scott Nemetz as well as other nieces and nephews.

In addition to his parents, Larry was preceded in death by two sisters, Kay Horstman, and Sue Butterfield; two brothers-in-law and a sister-in-law, Jack Nemetz, and Dean (Tanya) Nemetz; and his mother and father-in-law, John and Irene Nemetz.

The family will greet guests on Friday, November 11, 2022, from 12:30 – 1:30 PM in the Geib Funeral Center at Dover where Pastor Brian Flood will lead a service celebrating Larry’s life beginning at 1:30 PM. Burial will follow in the Dover Burial Park.