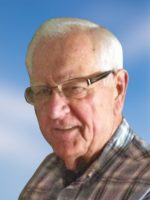 Marty was born on December 10, 1933, in Wainwright, Ohio to Carl and Anna (Bonvechio) Vesco. He graduated from Tuscarawas High School and joined the United States Army.

He was an avid supporter of the Tuscarawas Central Catholic Boosters and was named its first honored member.  Marty also was known as the fish guy at Sacred Heart Catholic Church Fish Frys.  In his younger years, he enjoyed bowling and playing baseball in Wainwright.  He was elected into the Tuscarawas County Oldtimers Hall of Fame.  Marty was also a lifetime member of the Tuscarawas V.F.W.

Memorial contributions in Marty’s name may be directed to the St. Jude Children’s Hospital, 501 St. Jude Place, Memphis, TN 38105, or to a children’s charity of your choice.