PAC to Welcome in 27 Shows Starting in September 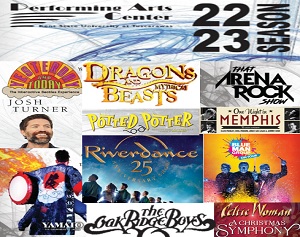 On tap for the 2022-2023 season at the Performing Arts Center at Kent State Tuscarawas is 27 show varieties.

The season kicks off in September with an adult-themed comedy show with Rob Schneider; meanwhile, two shows that were canceled last year, Richard Marx and Beyond Glory, are rescheduled for October 23rd and November 3rd respectively. The November show, it’s sponsored by the New Philadelphia VFW 1445 and VFW Ohio Charities, allowing this event to be free for veterans, active-duty military, and their families, and general public admission is $10.

As with any year, General Manager David Mitchell says there will be something for everyone to enjoy, including a few country artists.

“Josh Turner, a huge country star, and another show that I’m very intrigued about, there’s a group called The Frontmen, it’s actually a 90’s supergroup, and then we’ve got the Oak Ridge Boys coming back.”

Other acts include a kid-friendly show featuring dragons and a mythical adventure, That Arena Rock Show will take the stage in November singing classic rock hits from the ’70s, and ’80s, then a Christmas concert by Celtic Woman takes the season into December, with a February performance featuring the music of Billy Joel and Elton John.

Mitchell adds that there are two returning shows which includes the Blue Man Group.

“It’s the same blue men so it’s a brand new show. Plus, a return engagement of Riverdance. A crowd favorite, it’s been to the Performing Arts Center twice already and this time coming back again for three performances.”

A Girl Named Tom will also appear in March, which is a small town Ohio group of siblings who won NBC’s “The Voice”. The season comes to an end with Potted Potter, a parody that condenses all seven Harry Potter books into a 70-minute show.

Other scheduled shows include One Night in Memphis, the Guess Who, What It Is A celebration of Soul, Yesterday and Today which is an interactive Beetles experience, the Japanese drumming group YAMATO, MPACT, and Church Basement Ladies.

Tickets can be purchased in person at the Performing Arts Center box office, by calling 330-308-6400, or online at www.kent.edu/tuscpac. The box office is open weekdays from 8 a.m. to 5 p.m.