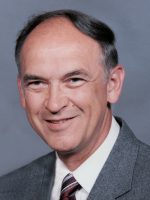 Born in his home in Stillwater, Ohio on October 3, 1938, Dick was the son of the late Andrew and Julia (Kacsmarek) Zavasky.

Dick honorably served our country in the US Army from 1961-1963 in Germany as a member of the Military Police.  After his discharge from the service, Dick began a 35-year career at Timken in New Philadelphia as a machinist.

On March 11, 1961, Dick married Bonnie (McWilliams) Zavasky and together they enjoyed 61 years of marriage. Family was always most important to Dick and he enjoyed spending time with his children and grandchildren. He also loved to work in his yard and could fix anything in his workshop behind the house. He was a member of Sacred Heart Catholic Church, New Philadelphia Elks 510, and New Philadelphia VFW Post 1445.

In addition to his parents and 8 siblings, Dick was preceded in death by two infant sons, Andrew and David, and his beloved cat, George.

Cremation care has been entrusted to Linn-Hert-Geib Funeral Home and Crematory.  There are no services planned at this time.