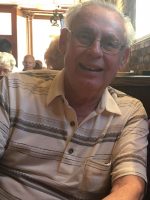 Robert George Cheney, 83, of Dover and formerly of California, passed away on November 7, 2022, with his loving wife of 60 years by his side, following several years of declining health.

After graduating from Amherst High School in 1958, Robert went on to serve his country in the United States Air Force. While in the service in California, Norma Marsh caught his attention at the Dream Bowl while he was spending an evening out with other servicemen. That evening began a lifelong commitment of love and devotion to one another. On February 4, 1962, they were united in marriage in Norma’s parent’s home in Vallejo, California.

Robert’s professional career spanned more than 30 years with the Safeway Grocery Store in California where he served as the head clerk. Additionally, Robert’s life was filled with beautiful memories alongside his family. He also was an avid golfer, gardener, and woodworker.

Visitation will be held in the Geib Funeral Center at Dover on Sunday, November 13, 2022, from 5 to 7 p.m. A service celebrating Robert’s life will be held in the funeral home on Monday, November 14, 2022, beginning at 11 a.m. with Pastor Wayne Baker officiating. Burial will follow in the Dover Burial Park where the New Philadelphia VFW Post #1445 will render military honors.

Those unable to attend are invited to send the family personal condolences by signing the online guest registry located on the funeral home’s website.