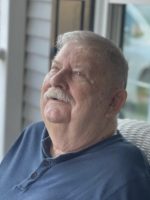 Robert J. Herlihy, 83, of Dover and formerly of Tennessee and Mansfield, passed away surrounded by his loving family on November 12, 2022, following a long period of declining health.

Born in Mansfield on September 7, 1939, he was the son of the late John “Jack” and Alberta (Crosby) Herlihy. After graduating from St. Peters High School in Mansfield, he continued his formal education at the University of Dayton and then received his master’s degree at Xavier University.

On September 3, 1960, Bob married his high school sweetheart, the former Mary Ann Smollen. They were blessed with a life of much love, adventure, and a tremendous family.

Bob was the controller and vice president at A.O. Smith Corporation for more than 30 years prior to his retirement. His career afforded him and Mary Ann the opportunity to live or work in England, Mexico, and throughout the United States. His life was filled with many days on the golf course, quiet moments tending to his garden, and thousands of days spent with family and friends playing cards, enjoying time on the water, and cheering for his children and grandchildren from the sidelines at their sporting events.

In addition to his wife of 62 years, Mary Ann, Bob will be forever cherished by his children, Lori (Dave) Miller of New Philadelphia, Mike (Anne) Herlihy of Long Grove, Illinois, and Cindy (John) Croley of West Chester, Pennsylvania; his grandchildren, Jessica (Svenni) Miller and their son, Luca, Kristin (Bob) Stenberg and their children Logan and Ellie, Nick (Elizabeth) Miller who are expecting their first child, Malcolm, Jake Miller, Kelly and Kate Herlihy, MacKenzie, Abby and Drew Croley; and numerous nieces, nephews, and friends.

In addition to his parents, Bob was preceded in death by his sister, Janet Herlihy.

Visitation will be held in the Linn-Hert-Geib Funeral Home & Crematory, 116 Second Street NE, New Philadelphia, on Tuesday, November 15, 2022, from 5 to 7 p.m. Father Jeff Coning will celebrate a Mass of Christian Burial in Sacred Heart Church on Wednesday beginning at 11 a.m. Mass will be live-streamed on the Sacred Heart Catholic Church Facebook page.