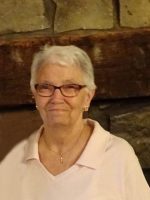 Born on October 27, 1943, in Union Hospital at Dover, Sandy, was the daughter of the late Elson Robb, Sr. and E. Lucille Arter Grove.

She attended Dover High School and on August 21, 1967, wed Hugh Miskimen. As a couple, they created a blended family and marriage that has spanned the past 55 years. Sandy worked for many years as the Deli Manager for M&M Market at Dover and later was employed by JoAnn Fabrics. She also enjoyed operating her own sewing and embroidery business.

In addition to her father and mother, Sandy was preceded in death by a daughter, Teresa McLaughlin, and a brother, James Arter.

The family will greet guests on Saturday, October 29, 2022, from 3:00 – 5:00 PM in the Linn-Hert-Geib Funeral Home & Crematory at New Philadelphia where Pastor Byron Stewart will lead a service celebrating Sandy’s life at 5:00 PM.