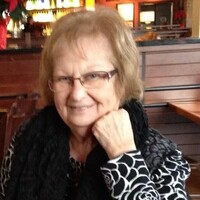 Twyla D. Mangon, 87, of Dennison, passed away on Monday, November 7, 2022, at Cleveland Clinic Union Hospital in Dover, after a period of declining health. Born in Dennison on December 8, 1934, she was the daughter of the late Rebert W. and Mary E. (Shaw) Jones.

A lifetime resident of the Uhrichsville/Dennison area, Twyla was a 1952 graduate of Uhrichsville High School and a member of Immaculate Conception Church in Dennison. She was a former secretary at Ohio Power Co., Harcatus, and a long-time secretary and office manager for Truck Sales & Service in Midvale. In retirement, she was a part-time secretary at Paul’s Auto Sales in Dover. Twyla loved to travel, and play cards and enjoyed following her grandchildren and great-grandchildren in all their sporting events.

On February 23, 1957, Twyla married Herman “Teeter” Mangon with whom she enjoyed 63 years of marriage until his passing on December 11, 2020. They are survived by their five children, Christine (Joel) Giannobile, Cynthia (Rob) McCarty, Faith (Dan) Bailey, Mary Beth (Phil) Gora, and Melanie (Jeff) Ridenour; son-in-law, Hugh Evert; 18 grandchildren; and 15 great-grandchildren. In addition to her parents and husband, she is preceded in death by their daughter, Teresa Evert; her sister, Constance; and her brothers, Fred and Tom.

Father Jeff Coning will celebrate the funeral Mass at 10:00 a.m. on Friday, November 11, at Immaculate Conception Church. Interment will follow beside her beloved husband in St. Mary’s Cemetery near Dennison. In keeping with Twyla’s wishes, no visitation is planned. Instead, her daughters will receive family and friends at the Knights of Columbus Hall in Dennison, immediately following the graveside service. In lieu of flowers, memorial contributions may be made to Immaculate Conception Church or the charity of the donor’s choice.