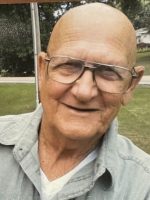 Born in New Philadelphia on September 25, 1936, he was the son of the late Henry and Agnes (Franz) Snyder.

Bill was an avid fisherman and a devoted husband, father, and grandfather. In his later years, he also enjoyed woodcarving.

Bill married the former Gladys Ruby Kirkman and was blessed with the birth of two sons. She preceded Bill in passing on May 26, 1997.

No public visitation or services are scheduled at this time.