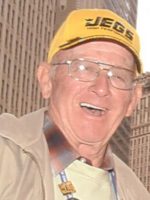 Born in Zoar, Ohio on November 30, 1942, Jerry was the son of the late William G. and Maxine Grove Griesen.

Jerry attended Fairless Schools and went to work for Wayne Auto, where he learned to repair vehicles. Jerry later became a professional truck driver and spent countless miles on the road traveling the country for Baker Highway Express and later Yellow Freight. One of Jerry’s proudest honors was to be selected as the first truck driver to haul three connected trailers across the Ohio Turnpike. Following his retirement, he continued driving part-time for Ag-Land.

He was a NASCAR enthusiast, who loved working in his yard, traveling with his wife in their camper to various Camper Club events, and spending the winter months in Florida. He loved traveling up until his passing and had hoped to make a trip to Florida this winter to visit family. In the past few months, Jerry enjoyed and was grateful for visits from family and friends, and looked forward to his regular visits from his loyal friend, Clem Westbrook.

In addition to his parents, Jerry was preceded in death by his wife, Phyllis Griesen who passed November 11, 2020; a sister, Linda Griesen; a brother, Ron Griesen; and two step-sons, Lonnie and Gary Shotwell.

Friends may greet the family on Wednesday, November 23, 2022, from 12:30 – 1:30 PM in the Linn-Hert-Geib Funeral Home & Crematory at New Philadelphia where Pastor Brian Flood will lead a service celebrating Jerry’s life in the funeral home’s chapel at 1:30 PM. Burial will follow in the Stonecreek Cemetery.