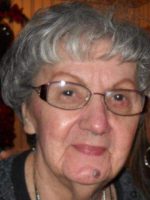 Yolanda Jagunic, 97, died peacefully on October 23, 2022, after a period of declining health. She is survived by her daughter, Judi (Mark) Dummermuth, and sons, Richard (Sonny Sonnhalter) Jagunic, and Dave (Jennifer) Jagunic.

Yolanda was born August 17, 1925, in Lorain, Ohio, and graduated from Lorain Senior High School.  She worked as a bookkeeper at Woolworth`s until her marriage to Peter Jagunic in 1947.  They relocated in 1956 to New Philadelphia where they raised their five children.

She will be missed by her daughters-in-law, June Page Jagunic and Janet Naylor Jagunic, and her sister’s children, Carol Broadfoot and Phil Hunyad.

A Mass of Christian Burial will be held on Saturday, October 29, 2022, at Sacred Heart Catholic Church 139 Third St. NE, New Philadelphia, Ohio at 1:00 PM.  The family will greet guests from 12:00 -1:00 PM at the church.  Burial will follow in Calvary Cemetery in New Philadelphia.